This memorial is a tribute to all the people from Papplewick parish who have served their country. It is dedicated in grateful acknowledgement of their achievements and the sacrifices they made.

Many people from the parish of Papplewick served in the Armed Forces and elsewhere during times of conflict. Most returned home, some scarred by their experiences. Amongst them, we remember Katherine Wharton, who served as a nurse with the British Red Cross; Claude Chadburn, seriously wounded in the face whilst in Palestine, and Freddie Wagstaff, who spent nearly four years working behind enemy lines in the Malayan jungle.

The service personnel listed below made the ultimate sacrifice, never returning home:

Harold was born in Mansfield during 1893, the younger son of Walter and Frances Bass, He lived near Forge Mills and trained as a teacher. He joined the Yorkshire Regiment’s 10th battalion in October 1915, just after the battalion came out of the Battle of Loos. He served in the Armentieres sector until the spring of 1916 when the battalion moved down to prepare for the Somme offensive. Captain Bass saw action just to the north of Fricourt on 1st July 1916, on the opening day of the Somme offensive. He fought at Arras and at Passchendaele in 1917 where he served as adjutant to the 10th battalion. In February 1918 the battalion was disbanded and Captain Bass was attached to the 2nd battalion of the West Yorkshire Regiment. He was killed in battle at the “Action of Villers Bretoneux” on Wednesday, 24th April 1918. His body, lost to the battlefield, has no known grave. His name is remembered today on Panels 31 and 32 of the Pozieres Memorial on the old Somme battlefield just off the Albert to Bapaume road. He left behind his wife, Bertha, who he married in 1917. 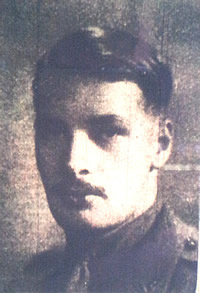 Alan was the eldest son of Claude William and Ethel Chadburn, of Papplewick Hall. In October 1938, he joined his father’s former regiment having recently left university. Prior to Christmas 1939, he returned home to Papplewick on embarkation leave from the regiment which was then stationed at Wragby in Lincolnshire. By Boxing Day he had re-joined his regiment and, as part of the main advance party, crossed to Cherbourg, took a train to Marseilles and sailed through the Mediterranean in the troopship Delwara for Palestine. As a second lieutenant, Alan found himself in charge of C Troop, 426 Battery.

Six months later, on 23rd June, the regiment moved from Palestine to the Western Desert in Egypt, near Mersa Matruh. Alan gained promotion to full lieutenant and took charge of D Troop. When Allied forces broke out from the siege of Tobruck, Alan acted as a Gun Position Officer. A most dangerous job at the best of times, not surprisingly after so much fighting, his luck ran out and Alan sustained serious injuries. It took several months for him to recover and rather than return home, he stayed in Egypt.

Alan Chadburn re-joined his unit after recuperating from his injuries in early February 1942. By April he had gained promotion to Captain and became Troop Commander of F Troop in 426 Battery. Regimental Observation Posts were hurriedly issued with Honey light tanks towards the end of May and the whole Brigade rushed forward into its battle position behind the minefield of Knightsbridge. According to one source, he spiked his three remaining guns when ammunition ran out and then sat astride one, picking off Germans with a rifle until killed. He died on Saturday, 6th June 1942 at Knightsbridge, Libya and is buried in Knightsbridge War Cemetery, Acroma, Libya, Plot 11, Row B, Grave 18.

Joseph was the second son of James and Alice Clarke, of Barracks Farm, Papplewick. He married a serving W.A.A.F., Helen Joy Spencer at St. James’ church, Papplewick, on 16th September 1944, and they subsequently set up home in Bromley, Kent, close to Joseph’s base at Chatham Royal Naval Yard. He died on Sunday, 29th April 1945, aged 24. The frigate in which he was serving, H.M.S. Goodall, was escorting a convoy homeward bound from Murmansk. A pack of German U-boats were waiting to meet the convoy at the entrance to the Kola Inlet of the Barents Sea (69-25oN 33-38oE). Some reports state that submarine U968 torpedoed the ship at 20.50 hours whilst other sources claim the U286 carried out the fatal attack at 22.00 hours that day. However, the ship’s magazine exploded blowing the forward part of the ship away. It was the last confirmed U-boat success in the Northern Atlantic.

Joseph has no known grave other than the sea but is remembered at panel 80,2 Chatham Naval Memorial, Kent.

Originally from Plumstead in Kent, Major (name not rank) and Mrs. Eleanor Hadley moved to West View House at Papplewick as tenants in 1932. When Claude Chadburn required someone to run his Dairy in Papplewick Park, the Hadleys took up residence at Home Farm (then the Poultry Farm). In his spare time, he played for Hucknall Co-operative Football Club. Just prior to war being declared, on 1st September 1939, Major Hadley joined the Royal Army Service Corps and initially served in France before being evacuated from Dunkirk. He was killed, at the age of 34, when the Empress of Asia sank as a result of enemy bombing action in the approaches to Singapore on Thursday, 5th February 1942. He has no known grave but is remembered at Column 98 of the Singapore War Memorial, Singapore.

Charles Haywood was born in Papplewick, the son of John and Mary Haywood. He was brought up in a cottage on Forest Lane, Papplewick. He married Mary Emma Bramley at the Baptist Chapel in Hucknall on 12th April 1909 and a year later their only child Alice was born. In 1911, he lived in Grange Cottages, Papplewick, working as a house painter on the Papplewick Estate. Then, aged 29 years and two months, Charles enlisted at Hucknall on 10th December 1915, joining ‘C’ Company of the 9th Battalion, North Staffs. Regiment. He was mobilised from June 1916, initially serving in the U.K. for 271 days before being sent to France in February of 1917. He was killed in action at Monchy-le-Preaux, east of Arras, on 27th May 1917. His company of pioneers were engaged in stabilising and rebuilding trenches close to the German Hindenburg Line. He is buried at Grave I.A.10, Feuchy Chapel British Cemetery, Wancourt, Pas de Calais, France.

Before war broke out, Robert Nunn lived at ‘Selwyn’ (now number 50) Forest Lane along with his wife Dorothy, and worked as a clerk in the Hucknall branch of the National Provincial Bank. He died on Friday, 2nd March 1945 whilst on war service in Holland and is buried in Grave 54.C.6, at the Reichswald Forest Cemetery, near Kleve, Germany.

Frederick was born in Basford in 1890, the son of William and Rose Pates. Prior to joining up, Frederick Pates worked for Messrs. J. and T. Walker at Forge Mill Bone Works in the capacity of Head Horseman. He married Florence Bailey in 1914 and they had two children, Frederick, born in 1915 and Kathleen who was only a few months old at the time of her father’s death. He died of his wounds on Sunday, 25th November 1917, at the age of 28, being buried in Grave XIII E.22 of Dozinghem Military Cemetery, Poperinge, West-Vlaanderen, Belgium.

Herbert was born in Papplewick, on 26th January 1897, the son of Herbert and Sarah Jane Webster. He started at Linby School on 7th April 1902 and left thirteen years later, on 11th July 1910. The family lived on Main Street at Papplewick in 1911. Herbert was unable to find a job after he left school. His father worked as a gardener for Mrs. Scott at Papplewick Lodge, but she fell ill and moved to Nottingham in early 1914, and so he had to seek employment elsewhere. The family moved to Red Hill, Arnold. Herbert was living in Mansfield Woodhouse in December 1915 when he enlisted into the Sherwood Foresters.

After training, Herbert was posted to the 2/5th Battalion of the regiment which saw action in Dublin during April 1916, during the Easter Rising. The battalion returned to England in January 1917 before being sent to France in February 1917. By March 1918, the Battalion were holding the front line near Noreuil. Early in the morning of Thursday, 21st March 1918, the Germans launched the ‘Spring Offensive’ with a heavy bombardment of the Allied lines, first with gas shells and then high explosives. Afterwards, enemy troops advanced through the area resulting in very significant loss of life. Herbert, then aged 31, was one of those killed in action. He has no known grave and is remembered at Bay 7, Arras Memorial, Pas de Calais, France and on Arnold War Memorial, at Arnot Hill Park, Arnold. 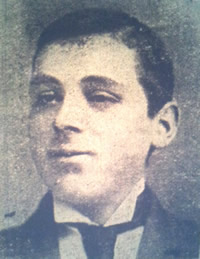 William Weston lived with his parents, Henry and Hannah (Annie) Weston, at the Seven Mile House in Papplewick. He was born on 25th May 1881, and christened at St. James’ Church on 14th May 1882. William attended Linby School but, being a sickly child, suffered a long illness in 1888. After leaving school, he worked at nearby Forest Farm and (later) as a labourer with Basford Rural District Council. Still being single, he enlisted at Hucknall Recruiting Office on 25th March 1916, and underwent training at Bedford before embarking for France on 1st January 1917.

He died on 3rd July 1917, aged 36, when the Battalion HQ, a dugout in the lines, was shelled. According to a report of his death, written by the regimental chaplain, he was in the trenches when a fragment from a passing shell struck and exploded a box of bombs. Private Weston had just enough time in which to call out to the other men working nearby to stand back. By doing so, he saved several lives. When a bomb burst, he was killed “instantaneously and painlessly.” His remains lie at G.5 Noreuil Australian Cemetery, the inscription on his grave reads ‘Peace Perfect Peace’.. 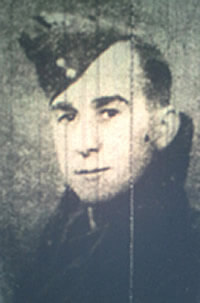 Herbert was the son of Charles Stephen Wright and Ada Wright, and lived at ‘Ferndale,’ (now number 52) Main Street, Papplewick. He attended Spring Street and then Beardall Street Schools in Hucknall, before joining the upholstery department of Messrs. Griffin and Spalding in Nottingham, having served his apprenticeship with Quality Furnishers, Park Drive, Hucknall.
Herbert joined the Forces during the early days of war and passed through Dunkirk. At the age of 22, he married 21 year old Emily (Bette) Judson at St James’ church Papplewick on 1st March 1941. In November 1943, he was drafted to Italy and subsequently taken prisoner at the Anzio beach head, during January 1944, after initially being reported missing. Following capture he endured the arduous marches inflicted upon prisoners of war as they were herded northwards into Germany.
According to a letter from the War Office Herbert Wright, Prisoner of War number 132983, died on 20th April 1945 “as a result of aerial activity at Ragensburg after being transferred to Western Germany from the camp in which he was held.” The men who were with him at the time of his death reported that it resulted from Allied air bombers attacking the railway lines on which he was working as a prisoner.
It appears Herbert’s body was initially buried at Plot F. Row 1. Grave No. 12 in Nurenberg American Cemetery before being reinterred at Grave 3.J.3, Durnbach War Cemetery, Bayern, Germany.