In 1996 the ‘Linby and Papplewick parish paths partnership’ (P3) was created to maintain the footpaths and rights of way in the two parishes. Since then considerable work has been carried out – to upgrade the surface of the paths, provide stiles and waymarks, and to rebuild the ancient bridge over the River Leen.  Funding from Nottinghamshire County Council and the Countryside Agency was used for the work to be carried out.  Since 2010, all paths in Papplewick and Linby have been maintained directly by the County Council.

More details about Rights of Way can be obtained from The County Council. You can report a problem here.

In 2005 the Parish Council revised the strategic plan for the development of footpaths in the parishes, covering the period 2005 to 2015.  This available as as a MS-Word document or Adobe Acrobat.  See below.  Additional information can be obtained from the Clerk. 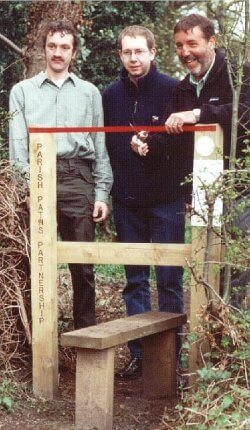 There are two linear footpaths running through the parish.  These are known as the “Meadows Path”  (which lies partly in Linby Parish) and the “Moors Path.”  There is also a path leading north to Newstead Abbey and Ravenshead from Top farm, but only a short section (known as Hall Lane) lies within the parish.  There are also concessionary paths through Moor Pond Wood, linked to the meadows which offer circular walks.  The Robin Hood Way loops through the parish.

In 2000, our Millennium project was to create the Walters Hill link path.

The route was generously dedicated by the landowner and takes the Robin Hood Way from Top Farm, Papplewick to Newstead Grange.  This allows pedestrians to avoid dangerous roadside verges along Blidworth Waye. The route was opened by Paddy Tipping MP on  21st April 2001.

This path links Papplewick and Linby.   It begins near to the S-bend on Main Street, Papplewick adjacent to Papplewick Lodge at SK 548 514.

This path joins Moor Road, Papplewick with the A60 Mansfield Road and begins on Moor Road at its junction with Papplewick Lane (SK 549 504). It is part of the Robin Hood Way, a long-distance footpath that runs through Nottinghamshire.

The Robin Hood Way is a long distance footpath within Nottinghamshire. It links Creswell, Clumber and Thoresby in the north of the County to Nottingham Castle in the south. The path runs through the parish in two loops.

From Ravenshead the path runs south into the parish via Kighill and down Blidworth Waye (Walter’s Hill) to the Papplewick Hall gates, then north-west along Hall Lane into the Newstead Abbey grounds, towards Nomanshill (Ravenshead).

The Hidden valleys is the name given to the area of south Ashfield and north-west Gedling. This is an area of rolling landscape with good potential for footpath and woodland walking. There are a number of leaflets available from libraries and Council Offices. The leaflet which describes the routes in Papplewick can be downloaded here. (Beware: This is a large file and will be slow to download)

Castle Mill was once a cotton mill, and later used for grinding corn

For over 100 years Papplewick had its own post office

Papplewick Grange was the mansion built by the cotton mill owners, now demolished.

The original farm on Main Street is a long-vanished feature.