Papplewick Hall and the Montagu estate

Papplewick was initially granted to the Augustinian Prior and Convent of New Stead in Sherwood in a document dated 25th June 1120. The foundation Charter of Newstead dates from around 1170 and includes “Papplewick, with the church of the same town, and the mill which the same cannons have made and with all things pertaining to the same town in wood and plain…” but provides no supporting information as to what the town of Papplewick then consisted of.  Newstead Priory retained control of Papplewick until 1539. In the preceding year it had to pay fines of £233 6s 8d to remain in existence and on 21st July 1539, the 12 canons remaining surrendered their property to Henry VIII’s agent, Sir John Byron. Soon after, by grant dated 28th May 1540, Sir John snapped up Newstead and its environs, including Papplewick and Linby, for the handsome sum of £810.

Papplewick remained in the possession of the Byron family until the early years of the 18th Century. William Byron, another member of a family constantly short of cash, sold Papplewick to Sir Theodore Colladon and his wife Lady Susanna Mary Amyot Colladon. Upon Sir Theodore’s death in 1712, the Papplewick Estate went into trust for his daughter, Anne, with the rents and profits going to Lady Susanna during her life time. Lady Susanna outlived her husband by 40 years and in the interim, during 1725, Ann married Charles Montagu M.P., commencing an association between Papplewick and the name Montagu, if not a direct line of succession, which lasted just under three centuries.

Charles and Anne Montagu had three children, Charles, who died at a young age, Anne and Frederick. Upon the death of his father in 1759, Frederick succeeded to the Estate and exerted by far the greatest influence of any individual over this parish. Papplewick Hall was built for Frederick between 1781-1786. The architect is not known. 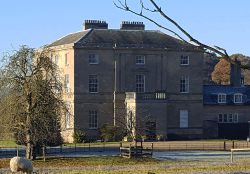 Frederick often became deeply involved in the conduct of matters throughout the county of Nottinghamshire (including the establishment of the General Hospital and the creation of “his” volunteer Army to fight of an anticipated French invasion). He was the M.P. for Northampton and later Higham Ferrers. He gained ministerial office to the Board of Trade and later as a Lord of the Treasury in the Governments of Rockingham and the Duke of Portland (1782-1787). Between 1797 and 1800 he planted six plantations in the parish to commemorate great naval commanders and their victories .

Frederick remained single and without a direct heir at the time of his death in 1800. Papplewick passed into the hands of trustees and his niece, Catherine Judith Fountayne, for her life time; Ann Montagu having married John Fountayne, Dean of York in 1754. Catherine Fountayne lived at Papplewick until 1822 but did not marry and upon her death the Estate went to Richard Fountayne Wilson of Melton-on-the-Hill (near Doncaster). Under the terms of Frederick’s will, he was supposed to take the name and arms of Montagu in preference to his own but bestowed the privilege by Royal Licence upon his 10 year old son, Andrew, in 1826.

Andrew Montagu took charge of 1,758 acres in Papplewick during 1840 and moved into Papplewick Hall from his home at Normanton, Rutlandshire. He did not stay here long but became a frequent visitor and it is said that a suite of rooms were constantly kept available for him at the Hall. Like his predecessors, he never married and upon his death in 1895, the Papplewick Estate was once again left in trust, this time for his brother’s youngest son, James Fountayne Montagu.

James did not succeed to his Papplewick Estate until his 25th birthday in December 1912, and began to put into effect the radical alterations he envisaged. Fourteen brood mares were stabled here with the intention of breeding hunters and race horses. Papplewick Park was divided into paddocks for exercising and part of the gardens around Papplewick Hall were allocated as future horse accommodation. However, the First World War intervened, James left for France as a Lieutenant in the Royal Lancers and returned a changed man. He ran up large debts and some of his other estates began to disappear under a thick blanket of secrecy. In April 1919, Alderman Albert Ball emerged as the purchaser of the Papplewick Estate for the hitherto undisclosed sum of £136,410 14s 5d.

Thereafter, the Estate was divided up amongst whoever could afford it. The Hucknall Torkard Industrial Provident Society purchased 1,058 acres in Papplewick and Linby, whilst Sir Charles Seely took another 444 acres centred on Forest Farm. With the piece-meal sale of smaller properties, Papplewick changed forever.

Today the house and grounds are privately owned. They are visible from the Robin Hood Way.

Other Areas of Papplewick History

Castle Mill was once a cotton mill, and later used for grinding corn

For over 100 years Papplewick had its own post office

Papplewick Grange was the mansion built by the cotton mill owners, now demolished.

The original farm on Main Street is a long-vanished feature.

The village garage closed in 2005

Some extracts describing the activities of those living in Victorian Papplewick.

The victory plantations and their monuments

The cotton mills on the Leen

From 1778 until 1830 Papplewick was an important centre for producing cotton thread.

The changes in population

Some extracts from the England and Wales census, showing the changes in population over the last 200 years or so.

The parish church in Papplewick is dedicated to St James